That evening (the theme)


I was playing around with a composition and a video.

Here is what happened "That evening"..


Like it? Create your own at GoAnimate.com. It's free and fun!
Posted by Ramya at 2:48 AM No comments:

"Quiet nights of quiet stars
Quiet chords from my guitar
Floating on the silence that surrounds us"..

Couldn't help but put up this terrific track from the 1963 record featuring Stan Getz,  Gilberto(s) and Carlos Jobim. Hope you enjoy it!
Posted by Ramya at 5:46 AM 2 comments:


As the saying goes -- "Out of tune notes have the same rights as notes that are in tune, so they have every right to be heard". Supporting this, is the great Bossa nova song "Desafinado" whose title means "Out of tune" - although one can say it is anything but 'out of tune' and just all brilliance, soul etc. Listening to the lovely voice of Elis Regina sing it, is taking it to another level. Take a listen --

And now, listen to the masterpiece "Ayirathil Naan Oruvan" by the great south Indian composer A.R.Rahman. The bassline of Desafinado is intact :-) But the melody that follows is so alluring that the charm remains even after 15 years of listening.

From the time I can remember, back as a kid (which is in the early 90's),  a question always popped up in my mind during my vocal practice routine -- Do I 'have' to practice scales? Over the years, I could see the immense importance it can have on a musician's ability to understand and deliver. Over the last few years, during my vocal lessons with the prominent violinist A.Kanyakumari, I was amazed at how much importance she gave to scale practice.  But the question still bothers me -- do "kids" need to practice scales?

As a kid, music classes were always fun for me. It was the highlight of my day/week. At the same time, I saw a lot of my peers dropping out of music lessons to be able to do something more "fun". I couldn't understand why it was considered "boring" for others?

The question -- do "kids" need to practice scales? While it can be tremendously enriching, it is also the reason many kids fail to continue learning music as they relate to music as 'being monotonous'. In "How Music Works", the author John Powell elaborates on this; which I finally think makes sense as an answer to my original question - "Do Kids really need to practice scales"?

--
Here is the excerpt from his book --
"One thing we haven't covered so far is why generations of unhappy children have been forced at knife-point to practice playing scales on their instruments when they could be having much more fun playing real pieces of music. There are two reason for this, but I think they are rather feeble when you take into account the degree of boredom which scale practice induces, and the number of kids who have abandoned music because of it. The first reason to practice scales is that it makes you get used to using all the notes on your instrument. The second reason is that lots of tunes involve fragments of scales. In "Baa Baa Black Sheep", for example, the words "sheep have you .." are four notes of a major scale. Because scale fragments turn up so often in tunes it's helpful to have the whole scale locked into your "muscular memory" in the same way that it's useful to memorize multiplication tables -- it saves alot of effort later. On the whole, though, I think far too much emphasis is placed on scale practice in the early years of musical education. If the student is going to take up music as more than a hobby she can move on to scale practice later if she wants or needs to. While I'm feeling all hot-headed and revolutionary, why don't all you music students abandon scale practice in favor of improvisation practice?"
--

I strongly believe that while kids should have discipline during practice, they should also have the freedom to sing/play and listen/learn as they wish. It makes learning more fun and implants happy memories associated with music as opposed to a strict monotonous practice routine; and most importantly not dislike music.
Posted by Ramya at 3:12 AM 1 comment:

The music says it all. 'Antonio Carlos Jobim' was fondly known as "Tom" Jobim. Antonio Carlos Jobim was born in Rio dio Janeiro, Brazil in 1927. He came from a family with a long cultural tradition. Tom's sister Helena writes in his biography that it was Tom's uncle Marcelo Brasileiro de Almeida who was widely responsible for tapping the artist in him. She recalls that Tom would seek his blessings now and then. He was introduced to classical piano at the age of 14. He originally planned to become an architect, but Fate had different plans for him. Music became his first love and everything else. He would play piano in bars and nightclubs to earn a living, whilst continuing to listen to classical and jazz. He loved the music of Chopin, Debussy and Villa-Lobos. He went on to become an arranger for a record label, but apparently started disliking it. He then started composing and achieved great success; and is regarded as one of the greatest composers/song writers of the the 20th century. He is also known as the Great Romantic Melodist because of the several melodies he created which went on to become the most famous of jazz standards.

How can one - who created a simple rhythmic structure and repeat it over and over again become one of the greatest composers of the 20th century? According to composer Julio Medaglia "Jobim is like Mozart, who at the peak of his creativity composed the simplest most crystalline 'Divertimento for Strings' ". Tom Jobim created a style that bridged the gap between Brazilian and American music in a fresh, yet natural way. In 1956, he achieved his first break for providing part of the score for the play 'Orfeo do Carnival'. His collaboration with American Jazz Saxophonist Stan Getz, Joao Gilberto and Astrud Gilberto was key to his popularity in America. In 1958, he created the "Bossanova" along with Joao Gilberto, which is became a sensation. In 1962, he achieved international recognition for "Desafinado".  For this, he partnered with pianist Newton Mendonca with whom he also composed "One note samba". It is said that they both contributed music and lyrics and had a great partnership.

According to guitarist/composer Edu Lobo (in an interview), Tom was an early to bed, early to rise sort of person. He would go to bed at 9 and wake up at 5 and practice scales. Tom's house was always open to his friends. When they played music, if he'd like something he would go to the piano and will attempt to learn it. In turn, he would create a new chord which others would learn. If he did not like a tune, he would say "That's cute".

Antonio Carlos Jobim used themes such as love, betrayal, joy and nature. There still exists the old apartment building 107, Nascimento Silva Street where he and his wife lived for sometime. It is here where he composed "Girl from Ipanema" and "Corcovado". He was known to be more fond of recording that touring. Here is an excerpt from the conversation between the Brazilian writer Clarice Lispector and Tom Jobim - CL - What is your hidden face? ACJ - The music. The piano in the dark bedroom provided me a possibility of infinite harmony. This is my hidden face. My escape and my shyness inadvertently brought me to the Carnegie Hall spotlights. I always ran away from success, Clarice as the devil runs away from the cross. I always wanted to be the one that never goes onstage. The piano offered me, back from the beach, an unsuspected world with ample freedom -- those keys were all available and I foresaw the roadways opening up to me, everything was licit, and I could go anywhere I wanted as long as went as a whole".

Quoting the maestro in his interview with Clarice Lispector "The most important thing in the world is love. The most important thing to a person, as an individual, is the integrity of the soul, even though from the exterior it may look dirty. As to what is love, love is giving. The one that does not give becomes possessed with self hatred. Lonely love is foolishness". And with that said, he gave the world a repertoire of songs that continue to move people to date. The world was saddened when he died on Dec 2nd, 1994 as a result of cardiac failure. But, Antonio Carlos Jobim's legacy will live on forever.

Attempted synthesis for the "Transitioning Vocalist" class at The JazzSchool, Berkeley, Ca.
Posted by Ramya at 4:13 PM No comments:

Where skill and emotion combine 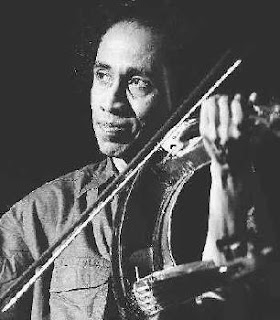 At times, we hear music that is technically brilliant. It is so beyond technical reach, that we are in awe. Fingers cannot move any faster on a guitar/violin, the pitch cannot get higher with a voice, the vocal range is absolutely mind boggling and seems impossible. It is not even human. But it does not touch us.


One person who can do all of this and yet stir emotions with his music is L.Shankar. Every time I listen to his music, it gives me a picture of life that is totally different than what I see/feel normally. Fortunately or unfortunately, I cannot explain it. Here is something for you, to find out yourself.

And if that wasn't enough, here is another one where L Shankar collaborated with Frank Zappa - 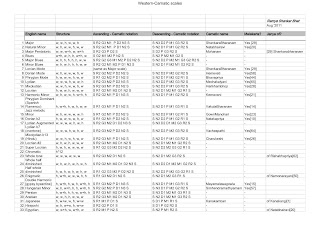 In Carnatic Music, one learns several hundred ragams(scales) and thalams(rhythm). While I was preparing for my Berklee audition couple of years ago, I had an opportunity to browse through some western scales. Since then I have been quite intrigued by the similarities (and differences); how western scales translate to Carnatic music and vice versa. I finally managed to put together the following table which consists of a western scale and it's equivalent carnatic ragam, if any. It is interesting to see how the scales either translate to a Melakarta raga, janya raga, or a random vakra ragam. I really enjoyed doing this and found something very interesting - what is called the "Hindu scale" (Myxolodian b13) is actually raga "Charukeshi". Apart from this, there are other scales like "Japanese" which is "Kanakambari"," Jazz Melodic Minor" which is "GowriManohari". I am looking for the carnatic equivalent of "Hirajoshi", which seems like Shivaranjani with a flat "dha". It will be great to hear what you think of this and if you can find the missing links to any other scales here..
Posted by Ramya at 10:26 PM 5 comments: